OAHR participation in FGM report: A Call For A Global Response

OAHR participated in the international report A call For A Global Response to end Female Genital Mutilation/C. The joint report was prepared by a group of women’s rights international organizations such as Equality Now, which is an international human rights organization using the law to protect and promote the rights of women & girls since 1992 and is the International Gender Equality Prize 2019 winner. the report was also prepared by END FGM Network EU, which is a European Women’s Rights Network, consists of 30 European organisations uniting to end FGM in Europe & beyond and END FGM/C U.S Network. The report included an interview with Habiba Al Hinai, OAHR executive director who prepared in 2014 a study about FGM in Oman.

Torture in the Sultanate of Oman: Lost Liberties and Suppression of Human Rights Activists 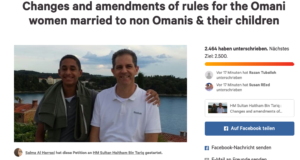